The Grand Valley Region follows the mainstem of the Colorado River stretching from De Beque Canyon to the Colorado-Utah state line. The two main tributaries are the Gunnison River (in the Gunnison Basin) and Plateau Creek. Due to the favorable growing conditions and the supply of the Colorado River (previously the Grand River) the valley was one of the first areas in the Basin to develop and consequently, it has some of the most senior water rights. These senior water rights historically place a call on the river requiring water to be delivered to the region; this call is sometimes referred to as the “Cameo Call”. Maintaining this call and requiring delivery of the large flow of water to the lower Basin is a top priority. The irrigation entities that comprise the Cameo Call are the Grand Valley Irrigation Company, Palisade Irrigation District, Orchard Mesa Irrigation District (OMID), Mesa County Irrigation District and Grand Valley Water Users Association.

Grand Valley domestic water providers have made strong efforts to coordinate their services by establishing over 31 interconnects among, at least, four separate systems. This regional cooperation has even expanded to include the local irrigation entities to better coordinate water needs and manage the water resources in the Valley. This type of regional cooperation should be a model for not only the Basin but the entire state.

Ute Water Conservancy District (Ute Water) is the largest domestic water provider in the Colorado Basin with approximately 80,000 customers (Ute Water, 2014). Despite strong conservation gains lowering the average water use to less than 80 gallons per person per day, Ute Water anticipates a water Gap of approximately 9,000 AFY by the year 2045. To meet this Gap, Ute Water is currently pursuing permits to enlarge Hunter and Monument Reservoirs, both of which are located in the Plateau Creek watershed along the north side of the Grand Mesa. After 10 years and more than $1.5 million dollars spent by Ute Water the permit application continues to be under review by the U.S. Environmental Protection Agency.

Grand Valley Region is known throughout the state for its robust agriculture production that produces vegetables, fruits and grains on over 70,000 acres (Spahr, et. al., 2000). The most famous products from the Grand Valley are the prized Palisade peaches and numerous vineyards and associated wineries. The region is home to the City of Grand Junction and the surrounding communities which combined make it the largest population center in Colorado’s West Slope. Although the region is located in the lowest elevations of the Basin it is still home to the Powderhorn Ski Resort located on the north side of the Grand Mesa.

The most significant needs heard from the Grand Valley can be summarized by the need to protect, maintain and, if possible, increase flows in the Colorado River, not only to benefit the streams but to assure Colorado River Compact compliance and power production at Lake Powell. The Grand Valley desires to make best use of the Shoshone and Cameo calls, improve waterquality in the streams and particularly in the mainstem of the Colorado River, and improves the permitting process to allow for more efficient approval of water storage projects. A further concern for the Grand Valley is the continuation and success of the recovery of the endangered fish in the lower Colorado River. Water quality improvements are also a need due to high salinity and selenium concentrations which result from applying water to Grand Valley soils. Substantial investments have been made to line ditches and improve irrigation practices to reduce salt and selenium loading in the river. High salt levels cause problems for downstream agriculture, while high selenium levels negatively impact waterfowl and endangered fish. The Grand Valley is also a supporter of interstate activities to create real “new supply” such as desalination projects in the Lower Basin and importation of water from remote watersheds. 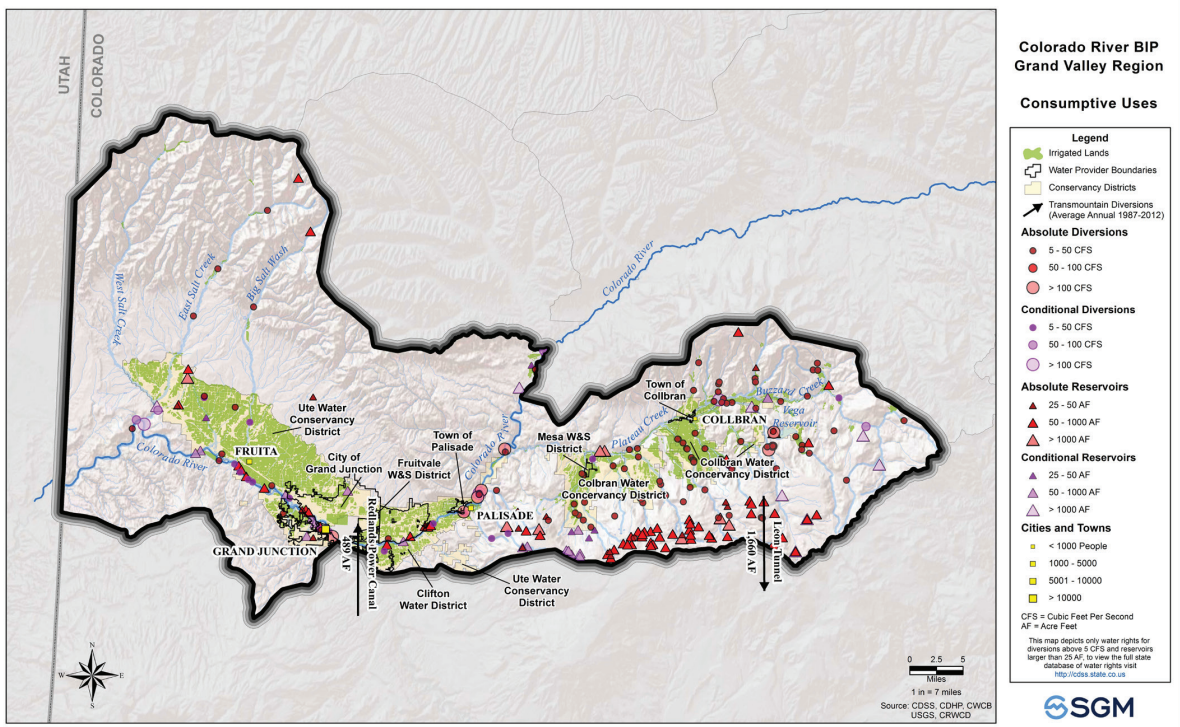