To leverage their resources, these two formed an informal coalition, and invited others in the ag research community to provide input into the kinds and frequency of measurements that would be most useful to a broad spectrum of agricultural customers. A standardized set of instruments was selected, a standard datalogger program was developed, and a fledgling network of some eight stations was established in major irrigated areas of eastern Colorado. As interest grew and funds were made available, primarily from potential users, more stations were added. 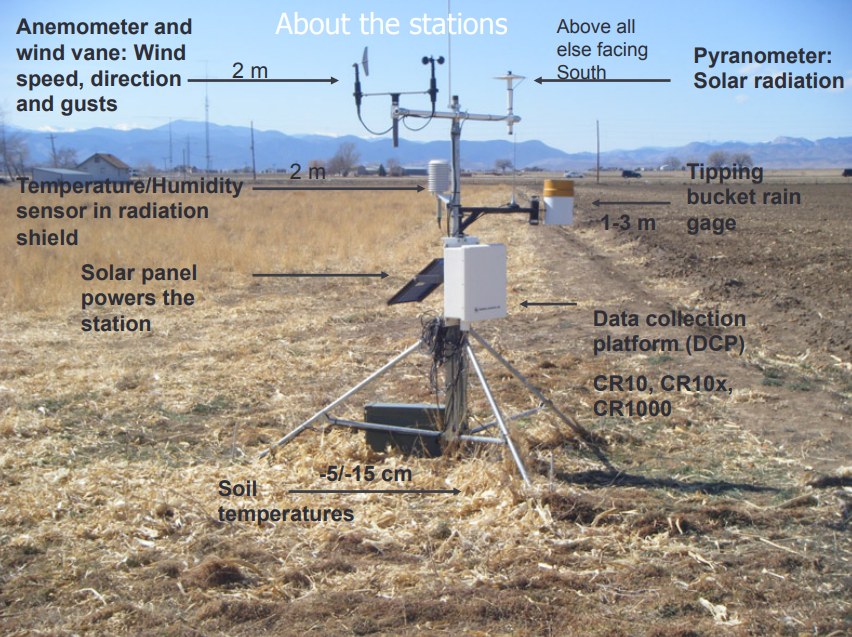 Initially, stations were located near established phone service to allow daily collection of data. Soon, cellular phone service began to become widely available, and the group determined that this methodology was a reliable and inexpensive method of data recovery. Commercial software was used to download data from the growing list of stations shortly after midnight to a USDA-ARS computer, from which it was then distributed to interested users via answering machine, automated FAX and satellite downlink (Data Transmission Network).

As the network grew, Colorado Climate Center (CCC) at CSU became interested in these data, and subsequently took over the daily data collection and quality assessment. CCC added internet delivery and a wide range of data delivery options, and continues to improve the user interface in response to a growing interest in these data.

This is the description of a typical CoAgMet station. Most stations have a similar configuration, but sensors, dataloggers and settings vary somewhat throughout the network.

Where Are the Stations Located?

CoAgMet stations are spread throughout Colorado, but station locations within the Colorado Basin are identified below along with a link to view a map of the entire state’s locations.